What is technology disruption and how will it affect businesses and organisations?

Written by Jeremy Sullivan for the University of Canterbury Executive Development Programme.

Unless we collectively focus more capital on disruptive innovation, efficiency gains will lead to higher unemployment and stagnant or negative economic growth (Christensen, 2013). In this essay I will be addressing the topic question “What is technology disruption and how will it affect businesses and organisations?” Disruptive tehnology has the power to create and destroy value chains and markets. Those with a pure targeted focus towards sustaining and efficiency innovation, risk being blindsided by the new markets, technological innovations can create.  Firstly, I will define what technology disruption is; providing examples of previous disruptive technologies, namely the; Personal Computer and the low-end disruption of the Automotive Industry. Secondly, I will discuss how it will affect businesses and how they can best mitigate the threat posed by disruptive innovation. Thirdly, I will discuss disruptive technology at an organisational level & pose questions as to the flaws in the theory of disruption. Finally, I will conclude the essay.

What is technology disruption?

Clayton Christensen, author and creator of disruption theory defines a disruptive innovation as: “a product or service designed for a new set of customers”. (Christensen, C. Key Concepts, 2015).

Technology disruption is the advent of a new or existing technology that is used and/or created in such a way that it renders the incumbent obsolete, over years or decades. Often it is the business model, rather than the technology itself disturbing the existing market or value network, creating new markets in its wake (Harvard Business Review, 2008) An example of this is the personal computer, the computer was not new by the time IBM came on the scene in the 1970’s. IBM disrupted the market for type writers and main-frame computers by developing best in breed design for the truly personal computer, bringing the computer to the masses. The ripples created new markets and transformed communication. The personal computer has since been disrupted by the laptop and smart phone.

Technology disruption can be further discussed as low-end technology disruption. Low-end disruption is when a competitor enters the market at low-end and through an improved business model; competes on cost, due to efficiencies. Providing improved margins to both companies. The incumbent is motivated to leave the low-end of the market as it is usually the least profitable.  An example of this is Toyota in the 1960’s; they entered the market with cheap, basic, low margin vehicles, an area of the market that General Motors were happy to ignore; given the higher margins upstream. Over-time Toyota moved up-market themselves, taking General Motors clients as they provided a ‘good enough’ product at a lower price point. Low-end disruption is now affecting Toyota from companies such as Hyundai and Kia, who in turn are beginning to be disrupted by the Chinese car maker Chery, low-end disruption moves up through the value network over time. (Christensen, 2013)

How will it affect businesses?

Disruption is expected to play a major part in the shaping of businesses over the next decade (EIU, 2011). Technology disruption will flatten the typical hierarchical structure of an organisation by increasing the visibility of senior management (EIU 2011), making them more accessible. Outsourcing previously in-housed competencies such as the IT systems to cloud networking organisations will place people’s jobs at risk. The efficiency innovation trend, has been evidenced with a large number of organisations moving call centres to emerging countries, for example. This modulation of the corporate structure will be advantageous to commoditised industries which have standardised components. Outsourcing, by definition, is designed to increase margins and allow the company to focus on its core competencies, reduce net assets, increasing the return on equity.  Christensen theorises, the ever increasing investment in efficiencies has led to the stagnation of the economies of Japan and America (Christensen), given the extended time horizon of developing disruptive innovations, businesses have been continuously reinvesting in efficiency gains as they have the highest internal rate of return (IRR). The continual re-investment in efficiency gains, rather than disruptive technologies, is to blame for stagnating growth in America and Japan.

Efficiency innovations have the power to create new jobs and businesses as well as destroy them. Job and economic growth, can only be sustainable if disruptive innovations outnumber efficiency innovations. I use Hamilton Hindin Greene Ltd as an example. In the 1970’s the organisation employed 30 people as typists to send out the contract notes (invoices) and scripts (shares certificates) this is now done by automation, and is monitored and managed by two administration staff. Conversely this technology has created new jobs in the field of Information Technology, who on average, are more productive per hour worked than typists.  The Economist concluded in the aforementioned research paper that technology disruption is more likely to increase rather than plateau or decline (EIU, 2011). Businesses will need to allocate resources to disruptive innovations or risk being disrupted.

For businesses looking to deploy disruptive technology, the strategy Christensen suggest is to compete against non-consumption, rather than directly with the incumbents best clients, with a product that is ‘good enough’ and move upmarket with a disruptive business model, like the mini-mills did to the integrated steel mills in the mid to late 20th century (Christensen, 2013) Understanding the job the customer wants to get done is more important than understanding the customer, argues Christensen. Understanding the customers’ pain point is vital for the businesses strategy, when implementing technology disruption. Whilst pursuing low-end disruption, businesses must be cognisant of the fact a low cost strategy only works when you have a high cost competitor. business strategy will need to allow time the move upmarket before the last high cost producer leaves the market, or risk being rewarded with an unprofitable industry, competing against other low cost producers. (Harvard Business Review  [HBR, 2015)

Issues with disruption theory range from the Christensen’s doctoral thesis being flawed (Gobble. M, 2014) to the theory being too, simple ignoring many industries; an example of this is that low-end disruption does not work for Hotels or McDonalds, where in order to move up market they need to emulate the competitor. For the Holiday Inn Hotel chain to compete upmarket, they would need to employ a doorman and have finer facilities, adding additional cost. (Stratechery, 2013). Another consideration of the limitations to theory of disruption is the theory is that consumers are rational. Ben Barajin, (Principal Analyst at Creative Strategies) argues the theory does not allow for emotive purchases and behaviours.

“A lot has changed since Adam Smith proposed the theory of supply and demand. Just because alterations have been made doesn’t mean it is any less valid. Disruption theory is valid and useful in the market. However to be relevant to speak to and apply to consumer markets, it needs to be refined to include the practices of behavioral economics”. – (Barajin, B, 2013)

How will it effect organisations?

Organisational structures will be tested, repositioned and compressed. Outsourced networks will replace the typical integrated infrastructure as sustaining innovations begin to commoditise existing technologies. With the increased level of big data the role of the middle manager will become less important; automation will increase organisational efficiencies at the cost of redundant services and employment. Organisations will no longer be able to hide bad service or inferior products due the increased visibility of customer feedback through social media and rating agencies such as trip advisor or menu mania. The increased visibility will speed up the organisational life cycle decreasing the amount of medium sized organisations and creating the dumb bell effect of organisations in industry. The dumb bell  effect, to which I theorise, is based on the micro organisation being able to operate globally without the traditional level of staffing levels. Medium Sized organisations will need to decide to become smaller and outsource (modular) or larger to gain economies of scale (integrated) and create barriers to entry. When we look at Apple for example, their business model is integrated, as opposed the Microsoft & Google which are taking the modular approach.

Organisations need to break the cycle of only investing capital in to efficiency measures and sustaining innovation and begin to redeploy money into disruptive innovations; the myopic nature of current management incentives has led to organisations continuously taking the low hanging fruit with little focus on disruption. Whilst sustaining innovations provide newer and better products they do little to create jobs, value chains and new markets. The current landscape has created a continuing pull between investor returns, management incentives and inventing time and capital in long term innovations capable of creating new markets. The story of Apple computers and the resignation of Steve Jobs when he was replaced by former Pepsi CEO John Scully is testament to the different management styles; one focused on future innovations the latter on current product lines and efficiency.

Christensen concludes that new technology needs to be deployed in undemanding applications, if you go after the incumbent with an inferior product you will be destroyed, sell instead to people who are not currently using the product or service as there will be no comparison.  The speed at which products improve often exceeds the needs of the consumer leaving a gap in the market for a worse and cheaper product. Nintendo did this with the Wii, when compared to the Sony PlayStation the Wii is a far technically inferior product. However, it competed for non-gamers, opening up a new market.

In conclusion: technology disruption must increase, in order to avoid stagnation in the worlds’ economy. Businesses and organisations need to adopt and encourage a culture of investing in disruptive innovations or they will be disrupted themselves.  The myopic nature of management incentives has led to an increased focus on sustaining and efficiency innovation, which in-turn led to stalled international economic growth. In order for businesses and countries, as a whole, to step-change towards the next wave of growth, incentives need to be aligned to achieve this. Within the organisation, teams need to be established and resourced to develop disruptive competencies. Current efficiency innovation will continue with current management incentives to maximise profit in the short-term, management must be cognisant of losing market share and reject continual removal of the low margin portion of the organisation without acknowledging the theory of disruption. Technology disruption will change the traditional hierarchical nature of commoditised integrated industries, with modulation taking over the integrated business model at the latter stages of sustainable innovation. The businesses that will profit are providers of modulated content in a mature market and the providers of new markets in the early stage of the product lifecycle. The nature of modulation will lead to a ‘dumb bell’ effect in the size of organisations, as medium sized enterprises and middle managers are replaced by efficiency innovations. This effect will create unemployment and a structural shift to businesses and organisations alike. 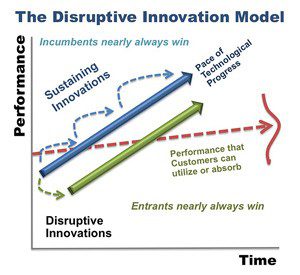 Stratechery (2013) What Clayton Christensen Got Wrong