What is a Wide Moat Stock and how to spot one

What do an Aussie funeral parlour and a Kiwi airport have in common? That may sound like the set-up to some crass joke but it’s actually a serious question. The punch line, or rather, the answer is: a wide moat.

The companies in question are InvoCare  and Auckland International Airport and they both belong  to a select group  of eleven stocks in Morningstar’s coverage list: the wide moat club.

The term “wide moat” is Warren Buffett-speak for competitive advantage. According  to Buffett’s medieval  metaphor, a wide moat is a company’s ability to withstand rivals – the same function a moat serves in protecting a castle. “The key to investing,”  Buffett wrote in a celebrated 1999 article in Fortune magazine, “is determining the competitive advantage of any given company, and, above all, the durability of that advantage. The products or services that have wide, sustainable moats around them are the ones that deliver rewards to investors.”

And if the moat can widen each year, then that’s even better.

Morningstar has used the moat concept as the foundational pillar of its stock  analysis  method – a method that can be applied across a broad global list of companies. In their book Why Moats  Matter: The Morningstar Approach to Stock  Investing,  Heather Brilliant and

Morningstar looks for five characteristics when deciding whether a company has a wide moat:

INTANGIBLE ASSETS: these include brands, patents, or government licences that keep  competitors at bay.

COST ADVANTAGE: A company that can beat its rivals by undercutting them on the cost of its goods or services is deemed to have a cost  advantage. On the other hand,  they may sell their products or services at the same prices as their competitors but make bigger profit margins.

SWITCHING COSTS: Changing from one provider to another can be a pain, which can cause a loss in productivity. “Customers facing high switching costs often won’t change providers unless they are offered  a large improvement in either price or performance,” note Brilliant and Collins, “and even then, the risk associated with making a change may still prevent switching in some industries.”

NETWORK EFFECT: A network  effect is said to occur  when an increase in the users of a product or service results in a corresponding increase in mutual benefits for both  old and new users. Social media giant Facebook is held to be a prime example of the network  effect in action.

EFFICIENT SCALE: This occurs when a market  is effectively served by a small number of producers or sellers. This dynamic dissuades newcomers because their entry would result in insufficient returns for all players.

In this two-part article, we examine which of these characteristics apply to the eleven stocks in the wide-moat club. Some  companies obviously possess more than one of these characteristics. Australia’s big four banks, for instance, build high barriers  to entry because of their edge in pricing and efficient scale. Conglomerate Wesfarmers, similarly, has an edge in pricing power and the number of brands it controls. Its hardware chain Bunnings is a household name.

But it’s crucial to note that a company’s wide moat will not always remain wide. Take Nokia, for example. Founded in 1865, the Finnish phone company once  boasted the majority share of the mobile phone market. Then along came Apple in 2007 with its iPhone, a development that revolutionised the mobile phone market  and shoved Nokia into irrelevance. A similar shift is occurring in the world of video games, note  Brilliant and Collins. Whereas Nintendo  was once the console king, these days it faces stiff competition from the sophisticated giants of today’s gaming landscape: Microsoft with its Xbox, and Sony with its PlayStation. As Brilliant and Collins argue, “profits attract competitors, and competition makes it difficult for firms to generate strong growth  and margins over the long term.”

WIDE MOAT NO GUARANTEE OF VALUE

Before we look at Australian wide moat  companies, a word on valuation. Investing in wide moat companies is a sound strategy, provided they are trading  at a good  price.  And that means heeding the advice of Brilliant and Collins when they say buy good businesses and good  prices. “There is a fair market  value of any business and good prices.

There is a fair market  value of any business, and opportunities to purchase great  businesses at less  than  that fair market  value give investors an advantage in generating future returns.” With that in mind, it’s crucial to note that several wide moat club members are currently overvalued, in the eyes of Morningstar analysts. Still, we hope this guide gives you a better idea on how to value and spot companies worth investing in. 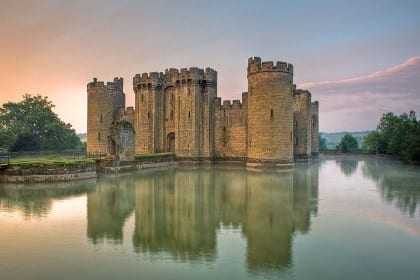